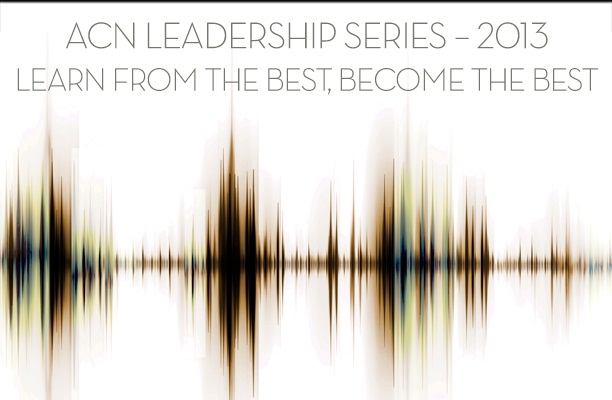 The 2013 ACN Leadership Series featured many of the top producing COCs including Patrick Maser, for a look inside the minds of the “best-of-the-best”.

“We talk a lot about the “best-of-the-best” at ACN when referring to our leaders and top producers. But what does this really mean? Yes, these individuals are consistently at the top of the production charts. Yes, they have customer acquisition down to a science. And yes, they can do a PBR in their sleep. But what really sets these individuals above the rest is their “never give in” mindset.”

Full article, “Is Your Mindset Set On Success?” – CLICK HERE

Open your mind to the opportunity in front of you.  Let Patrick Maser guide you to success, like he has guided thousands over the past 12 years. For more information on ACN, click here.

October 2, 2013 / Patrick Maser / Comments Off on On the Path to Making all Their Dreams Come True – Testimonial from Paul and Dawn Pelletier

For over ten years, Paul Pelletier owned and operated a successful construction company building high-end homes throughout Connecticut. In autumn of 2008, his business came to a halt due to the down economy. After having worked for 16 months straight without a day off, he realized that he had become a slave to his business. He found himself praying for “something that he could work with” when he and his wife Dawn were introduced to ACN.

The idea of making residual income on recession-proof, essential services that people need and use every day just made sense to him. Although Dawn was skeptical when she first heard about ACN, she had a big reason “why” she was open to listening to a new opportunity.

After 25 years of working her way up the corporate ladder, Dawn found herself in a place where she had no time freedom, working 60-70 hours a week. Her profession demanded so much time and attention that family life was almost non-existent. Nothing means more to Paul and Dawn than to enjoy life with their two sons, Kyle and Alex, and help them achieve their dreams.

Paul and Dawn saw countless others having success with ACN’s amazing business model so they stepped in bringing their coach-ability and work ethic with them. Following the system that #1 SVPs Michael and Patrick Maser created, Paul and Dawn became the first Team Coordinators and Regional Directors in the state of Connecticut.

Today, they are on the path to making all their dreams come true – being able to share and enjoy life with their boys, and give back to their family and church in a way they would have never imagined before. ACN and Michael Maser and Patrick Maser and continue to be the answer to their prayers!

Learn from the best of the best in this training video on how to grow your ACN Business.  Build your business the right way as Patrick Maser guides you through the proper steps to take to create success! 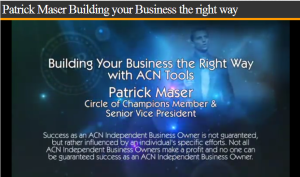 Touring the ACN headquarters allows leaders to show their teams the behind the scenes that brings this company together.  Patrick Maser recently held group meetings there to explain the benefits and potential with ACN.

“And it’s not a coincidence that these leaders are among the top people in the company consistently. In fact, they each know firsthand that visiting our office, showing off the ACN infrastructure and the ACN foundation creates belief like nothing else can and shows the value of this opportunity like nothing else ever will.”

Full article, “A Foundation Built on Rock Not Sand – Come See ACN for Yourself” – CLICK HERE

Open your mind to the opportunity in front of you.  Let Patrick Maser guide you to success, like he has guided thousands over the past 12 years. For more information on ACN, click here.

September 2, 2013 / Patrick Maser / Comments Off on I Owe My Success to the ACN System as Well as Patrick Maser… Testimonial from Shakawat Jewel

I came to the U.S. from Bangladesh in 2001 with no circle of friends or family, and really had to start from scratch. I thought that business ownership was the way to achieve the American dream and so started my first small business. It wasn’t long before I realized that I didn’t own my business but business owned me. There was no time for my family and friends. My routine revolved around my business leaving me no time for the people I cared about. When the recession hit in late 2007, I lost all of my savings and found myself having to start from scratch all over again.

In July 2011, a Philadelphia police officer came to my store. He introduced himself to me and asked me a simple question Jewel, do you look at other ways to make money?”. My answer was “Absolutely”. With my savings gone, I was looking at everything and anything. When I saw the ACN opportunity video, it made one hundred percent sense to me. I had already tried product based marketing previously so when I saw this service based marketing business, it made complete sense to me. Here was a business that did not require you to change anybody’s buying habits. I jumped in right away and through a strong work ethic as well as being coachable I was able to achieve success. I was fortunate enough to get mentorship from the number 1 SVP’s in ACN: Patrick and Michael Maser who stayed with me through all of the ups and downs.

I am grateful that this opportunity came by and I owe my success to the ACN system as well as Patrick Maser and Michael Maser. It’s allowed me to spend more time with my family. My goal is to help the others in my team achieve their ACN goals.