Patrick Maser | Helping thousands of people live their dreams for over 12 years. - Part 2

Jeff immediately saw there was a system that was in place, that with the combination of work ethic and coach-ability, they could create success. After five months, part time with ACN, Jeff hit the position of Team Coordinator, made over $18,000 part time his sixth month and was able to get out of his traditional business. After 19 months and help from Michael Maser and Patrick Maser, Jeff became a Regional Vice President. The ACN opportunity has brought much more than just the financial reward. It has forced him to grow personally and professionally, it has allowed him to help others create success, and he feels thankful and blessed to be part of such a unique opportunity. Jeff attribute’s his success to the system, the incredible leadership, and hard work. ACN has given Jeff the freedom he was always looking for. In August of 2011, Jeff was featured in a 2 page spread in Success From Home Magazine. Today he lives on the sand in Newport Beach, California is more excited than ever about his future with ACN. Jeff Attributes his success to the system developed by Patrick Maser and Michael Maser

February 2, 2014 / Patrick Maser / Comments Off on Residual Income Jumped Out at Me as the World’s Greatest Annuity – Testimonial from Gil Pemental

Gil Pementel started business ownership in the auto industry, but when an accident happened that broke his back he was forced to find something less physical. After some time as an analyst with Penzoil, Gil became a mortgage broker and owned his own office. In September of 2007, having closed the office, writing loans out of his house and down to $5700 in savings that was quickly being used to cover the debt. Gil was introduced to ACN. Gil says, “When I saw the presentation, the residual income jumped out at me as the world’s greatest annuity. I had network marketing experience in other companies, so I knew the power of network marketing. When I found this opportunity that wasn’t tied to over priced products, but to services that we all use anyway it created the perfect vehicle for me to provide a lifestyle for my family that is second to none. We are truly grateful for what ACN and Michael Maser and Patrick Maser, have brought to our lives.”

The Team Coordinator position was accomplished by Gil in 5 ½ months, and RVP in an astounding 16 months. Mr. Pementel oversees the activity in the Manchester, NH market place, and has opened a second New England training center in Portland Maine. Gil attributes this to a “monster” work ethic, the Rock Star system created by Patrick Maser and Michael Maser, and an overall desire to succeed.

Congratulations (From ACN) to the 2014 Circle of Champions Members, Including Patrick Maser

From ACN Inc. comes the 2014 Circle of Champions Members list… with Patrick Maser on it!

“This distinguished group represents the best-of-the-best in ACN.  Not only have they built incredible businesses of their very own, but they have helped countless individuals do the same. They’ve put the needs of their teams above the needs of themselves, and success is no longer defined by just what they can personally do; it’s defined by what they can do for others.”

Be So Good, That They Can’t Ignore You! Testimonial from Patrick and Michelle Dowling

January 2, 2014 / Patrick Maser / Comments Off on Be So Good, That They Can’t Ignore You! Testimonial from Patrick and Michelle Dowling

We took a look at ACN and decided to run hard with the opportunity from day one and have not looked back since. Patrick Maser, and Michael Maser provided us with an opportunity to dream again. The pressures of where we would be in 10 years financially when it was time for our four beautiful children: Taylor, Brooke, Ava, and Chase to attend college was just to much of a burden that we did not want to live with that feeling day in and day out. We wanted more for our kids then we knew that we would be capable of providing by leading the lives we were leading.

We felt as if we were meant to do great things in life and ACN was the vehicle that we truly believed would get us there. Here we have an opportunity to changes thousands of lives along the way and we will led by example and we will be there for every member of our team, day in and day out. In ACN you can not succeed on your own and we realized that very quickly. We will change the legacy of not just our lives but a legacy that will continue for years and years to come for this family.

We have one goal in this business. SVP/CIRCLE MEMBERS
Nothing will stop us! We just want to win! This team will win!
We live by a quote that was given to us by one of our mentors… “Be so good, that they can’t ignore you!”

We owe a special thanks to our entire team, and to three VERY SPECIAL brothers and one REAL special lady….Patrick Maser, Michael Maser, and Cynthia Maser.

Patrick Maser: Honored to be Considered Inspiring by Other ACN Consultants

December 2, 2013 / Patrick Maser / Comments Off on Patrick Maser: Honored to be Considered Inspiring by Other ACN Consultants

Patrick Maser featured in another consultant’s online blogger page being referred to as inspiring.  What an honor to be a motivating factor in changing people’s lives! 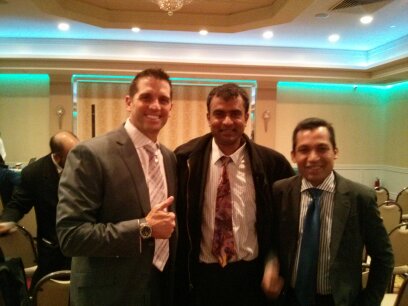